How to reach DELLAPASQUA DC 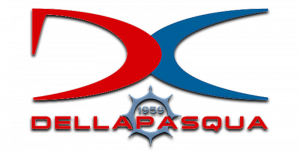 The history of the Italian motor yachting since 1959

60 years have almost elapsed since Giancarlo Dellapasqua started to build ships: a passion that very soon became a real job. He started working as an apprentice in Lugaresi naval shipyard in Bellaria (Rimini) and in 1959, after only 3 years, he passed the exam and became shipwright. Thanks to this he has been able to register boats up to 150 tons (an activity allowed only to engineers, to shipbuilders and to shipwrights). With this prestigious title he decides to build a small establishment for his modest boat yard in Savignano sul Rubicone; afterwards he transfers the head office of the shipyard to Marina di Ravenna.

In 1960 Giancarlo founded the brand DC; in that year they constructed together 17 boats and their hulls very soon crossed the limits of Romagna and were delivered all over Italy. The first DC models were equipped with a flat bottom; the fact of becoming acquainted with the new deep-V-shaped bottom called Hunt represented for Dellapasqua a turning-point in the way he constructed his boats: afterwards in fact he chose to adopt this kind of bottom for all his new hulls.

In the same period, both for passion and to become famous, they began to take part in motorboat races, such as “6 ore di Milano”; “Maratona dell’Adriatico”; “Pavia-Venezia”; “Centomiglia del Lario”, challenging the champions of the Lake of Como, who at that time were numerous and trained. These experiences gave birth to the first DC 4 and DC 5 boats, tourism hulls able to stand comparison with the most titled racing models.

That year he faces in the world of marine fiberglass construction, this new material is used for the production of craft in the yard, which in 1971 the first fiberglass model DC 6. The recent fibreglass plant (at nearby Punta Marina, in via dell’Idrovora) occupies 6,000 sq. m. and stands on an area of 35,000 sq. m. The company also has branches at Lavagna (Liguria).

In 1990 the prestigious brand DC remains only to Dellapasqua who, together with his sons continues the boatyard management.
The firstborn Mirco, joined the yard in the early eighties after getting his shipwright’s diploma at the Istituto Tecnico Nautico in Trieste. From the very start, he worked as general and technical manager of the fibreglass division and he played a part in all the decision-making that needed doing.
The second Patrizia also decided she’d work for the family business, she plays an important part in administration and the delicate financial side. The youngest, Serenella also joined the team in 1991. Over time, she specialised in the technical and administrative side.
Another key role goes to Stefano Salvadori – Serenella’s husband. He deals with suppliers, and keeps a close eye on the materials used. He also handles customer and media relations.

From 2017 a third generation has joined the management team of our boat yard, the grandson Alessandro, who has recently obtained a degree in naval engineering at Genoa University and who will use his expertise for projects and also for the commercial side of the business. One of the winning features is that Dellapasqua’s boats are built to fit the customer, with great attention to technical details and furniture and accessories, so no two models are ever alike.
The strengths of the Dellapasqua yard consist in its professional approach and reliability. This goes for its second-hand boats – models that appreciate over time.
A twenty-year-old DC will sell for more now than it did when it was new. The number of DC solded boats has grown steadily till 1300 exemplar over the years, most still are running